Following on from yesterday’s blog post.
I’ve now released a statement that went out to the press during the early hours of this morning.

Marks & Spencer have responded to me & the public (via Twitter) with “We’re sorry with the upset caused. We bought the t-shirt in good faith from a supplier & after complaint, withdrew from sale”. 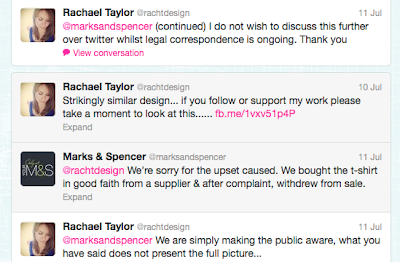 Here is my press statement…

“The top in question that has my design on them, was brought to my attention from a concerned colleague on the 9th of June, who wasn’t aware that I had gone into fashion –  let alone stocked Marks and Spencer.

Other emails started coming in from my fellow design students, who I teach on my surface pattern e-course were congratulating me on my new fashion line? and at this point I was completely confused at what had happened?

Images were sent to me and when I saw the finished product. I was not happy, as this is not what I would have created with my signature design, especially if I was launching my own clothing collection. The top was also selling in various colour ways.

More and more sightings of the top in different colours, in different stores around the UK were seen and reported back to me, some even made it in to Marks and Spencer’s front window displays.

I contacted my solicitor who then gathered the evidence and contacted Marks and Spencer.

It took over two weeks from the initial complaint, to take the tops out of all the stores, so I am afraid a simple sorry is not good enough, because of the way I have been disrespected and treated.

A quick action to immediately remove the tops from the stores should have happened, but unfortunately it took longer.

This is about the principle and the ownership of my own design that is used on many different products that I supply to my clients and shops. This design is one of my signature designs and I am recognised for this. After much deliberation (over the past month) I finally decided to go public with this as I knew I had to make a stand. It was my moral duty as a designer, teacher and creative writer.

I will be continuing to state my case and will be taking this matter all the way. I hope it continues to raise awareness about such an important issue and will hopefully stop it from happening again to other independent designers”.

Words can’t express how grateful I am for all of the lovely support that I have received recently. I really can’t thank you enough…

I’d also like to say a ‘BIG THANK YOU’ on behalf of all the independent designers out there. Thank you for defending us. You have really helped to raise awareness about this important issue! It seems to be happening to a lot of us!

My blog (as it always is) has been left open for voluntary comments & feedback. 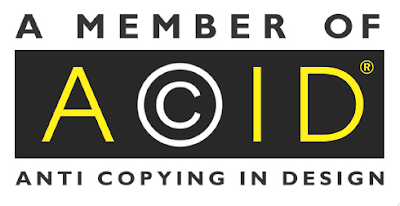